Life and Death: The Vietnamese Way 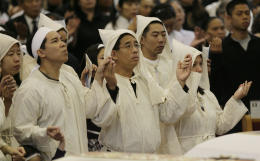 Asians, especially Vietnamese, are very peculiar about the notions and perspectives surrounding death.  For example, I was shocked to discover that Americans and perhaps, most citizens of the Western world do not photograph funerals or wakes.  It never occurred to me that this might be considered odd or at the very least, morbid until a friend was completely shocked when I showed him pictures of my grandmother’s funeral.

Why would you take pictures at a funeral? he asked, shaking his head in disbelief.

Why would you not? I indignantly retorted back.

I’ll have to admit, weddings, funerals or any large get-togethers give my family an opportunity to use our cameras.  Constant picture taking has strengthened our index finger to the point that it is second nature for us to press down on any shiny metallic button.  In fact, our picture-taking reflex is almost autonomical like blinking or breathing.

Growing up, my family used to receive pictures from funeral services of relatives in Vietnam.  The pictures were usually the same: black and white photos of relatives standing over graves or caskets looking grim and sullen.  On occasion, the accompanied letter would sometimes describe grief stricken family members trying to crawl in the casket of the deceased.  Whenever we got those letters, it would always spark a debate among the children as who in the family would be the casket crawler. Somehow I was always chosen being that I have a flair for the dramatics.

When my family got these funeral photos, we didn’t flinch or wince.  To us, morosely, it was like receiving a postcard but instead of saying, Wish you were here, ours would say, Wish your uncle was alive or Wish your cousin was here to enjoy this.

Vietnam is not only physically on the opposite side of the world from America, it’s also its philosophical opposite.  Most funeral services in America consist of mourners wearing black attire.  Men dressed in black suits and dark ties, women in black dresses and the occasional black veil.  Traditional Vietnamese funerals are contrastingly different.  If you ever walked in on one, you would probably stop dead in your tracks (no pun intended).

The most striking contrast is that Vietnamese mourners do not wear black: we wear white.  Well, I should clarify: the immediate family of the deceased wears white.  While Americans traditionally view white with weddings, Vietnamese associate white with funerals.  Red is the color of choice for weddings as it represents prosperity and luck, while white represents loss and a passing of life.  The color white symbolically represents the ashes of the deceased.  Since most Asians are cremated, it’s more appropriate for funerals than black.

When you attend a Vietnamese funeral, you’ll notice the deceased’s immediate family is sitting or kneeling in close proximity to the casket.  However, it is not the close distance that immediately draws your eyes but the traditional mourning regalia: white robes, pants and pointed hoods.

The outfit consists of white pants that billow out like over-sized pajama pants, a white wrap-around tunic that makes anybody who wears it a Samurai double and last, but not least, a white, pointed hood.  The hood is simple in design, two pieces of white cloth sewn together to form a pointed end, long enough to cover the neck but exposed in the front to show the mourner’s face.

Unfortunately, when I mention white, pointed hoods, it conjures images of the Klu Klux Klan.  However, the biggest difference is that Vietnamese are not ashamed to show our faces. Amazing how iconic a white hood is in American society that it immediately evokes feelings of hatred and animosity.  Asians view a white hood as sorrow and loss.  I guess, by the same token, Americans probably feel the same.

To Americans, talking about death is taboo but to my family, it’s connecting a duality.  Death is just as much a part of life as is the reverse, a delicate interwoven tapestry.  There is a balance as fine as a silk thread that has long been revered by us.  When we take pictures of funerals or wakes, it’s not to be macabre but more like a quiet reverence.  The pictures show the deceased was just as important in death as when they were alive.  When we are older and our memories begin to fail, we are comforted knowing that we have our pictures to show us the full panoramic view of our loved one’s life.

77 responses to Life and Death: The Vietnamese Way