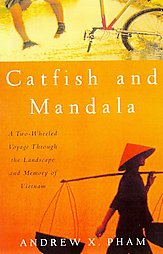 Catfish and Mandala, a memoir by Andrew Pham, details the journey of a Vietnamese American struggling to reconcile his Vietnamese heritage with his American ideologies.  Born in Saigon in 1967, Pham was raised in a moderately affluent household by Vietnamese standards.  His parents are educated, notably his father who is fluent in French and English.  Pham is the oldest son, the second of five children.  With middle class standing, his parents manage to secure some financial stability.  After the war, his family lost everything.  In 1977, he and his family narrowly fled Vietnam.  Pham was only viagra online no prescription buy viagra in us ten.  In his memoir, he voyages back to Vietnam in an attempt to rediscover his Vietnamese identity and more importantly, to harmonize his American identity with his Vietnamese past.

Virtually destitute, Pham’s emotional return to Vietnam is not typical of a viet kieu, a Vietnamese living abroad. Where as most viet kieu travel back to Vietnam laden with gifts and cash, Pham is empty-pocketed with barely enough money to sustain him.  In addition, his choice to travel through Vietnam by bicycle absolutely stuns his relatives. He battles crippling dysentery, numbing fatigue and debilitating hunger during his trek from Saigon to Hanoi. Traversing the varied terrains of Vietnam on his bicycle, Pham visits his childhood haunts. Each visit triggers a torrent of emotions. Pham discovers most of his childhood stamping grounds have been relinquished to squalor or urban development.  While the topography tests his physical endurance, it is the natives who test his spirit and resolve. Pham encounters distant relatives, devious tour guides, street urchins and ominous ruffians.  Each encounter takes an emotional toll.  In this journey of self-discovery and renewal, Pham comes to terms with his past, his identity and most importantly, his place in this world.

Pham’s descriptive details are awe-inspiring.  He describes each scene like an artist painting with vivid colors.  The images jump off the pages and the reader is immersed in a culture steeped with tradition, contradictions, irony and admiration.  This is not a typical travel memoir describing beautiful sunsets and charming resorts. Pham’s memoir is intimate, raw and honest. In his story telling, he is not biased towards Vietnam nor is he prejudicial towards America.  His unique perspective as a Vietnamese American allows him to view Vietnamese culture as an insider as well as an outsider.  He understands the language, the customs and the mindset of the Vietnamese people. On the other hand, his American upbringing allows him to disengage and contrasts Vietnamese values with his American ones.  It is this dichotomy that makes his story so engaging.

Pham writes with such clarity he transforms the reader from a passive observer to an active traveling companion.  The reader experiences Pham’s every emotion, struggle and accomplishment.  The key to this connection is that the reader trust Pham’s account.  His description of the Vietnamese people and culture surpasses his memory and familial recollections.  His rich details of the history and topography of each city he visits are proof of his diligent research.  His inclusion of local points of interest personalizes each place making each one memorable and enduring to the reader.  This book is more than a travelogue; it’s an intimate diary of discovery.

In his memoir, Vietnam is portrayed through Pham’s eyes. Uncensored and unobstructed, there are times when this view is abrasive and unsettling.  However, it is important he includes this seedier side of Vietnam.  If Pham’s homecoming only consists of embracing family reunions then this book loses its refreshing honesty.  It is this honesty that draws the reader in.  The reader is engrossed in Pham’s day-to-day trials and tribulations.  Pham makes the reader squirm in reaction to his swallowing a snake’s heart then makes the reader cheer when he stands up to local bullies and con artists.  The fact his stories evoke an emotional response from his readers is a trademark of a skilled writer.

Pham’s choice to travel on bicycle speaks of his unconventionality.  It is poignant he chooses a mode of travel that is inherently difficult.  His physical struggle parallels his emotional one.  When his physical perseverance is taxed to the limit, his emotional tenacity concurrently wanes.  Whether on purpose or happenstance, Pham chooses the most common mode of travel in Vietnam but the least utilized in America to retrace his heritage.  As an American, the assumption would be that he travels by vehicle or have professional guides help him.  Instead, Pham’s solo two-wheeled journey connects him on a grass roots level to a country he is longing to belong.  The story would lose its appeal if Pham had been chauffeured to the origins of his childhood memories.

Pham weaves stories of his family throughout his memoir, notable the story of his older sister, Chi. The conflict of reconciling one’s culture with one’s identity is profoundly illustrated with his sister’s own turmoil.  Being the first-born and a female, his sister’s life commences as a disappointment to her father.  It was not until she had a sex change did she receive some acknowledgement from her father.  However, acknowledgement is not the same as acceptance.  Alienated and depressed, Chi commits suicide.  Her family later dubs her suicide as an accident.  She started her life feeling like an accident and ended her life as one.  Chi’s struggle of acceptance and belonging is the same undercurrent that motivates Pham’s journey back to Vietnam.

The charm of this book lies in the vivid details.  Pham’s story telling is succinct but in that brevity he packs in a tremendous amount of information. The reader trusts Pham’s authority on Vietnamese culture.  He writes in a confident and assured voice.  His writing is universal in that readers unfamiliar with Vietnamese culture can still understand and follow the story’s progression.  While Asian, especially Vietnamese, readers can relate and compare Pham’s experiences with their own.

One response to Catfish and Mandala