Tossing the Salad and Pearl Necklaces 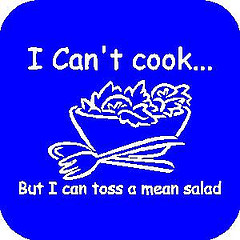 I have got to be the most clueless person alive.  I just found out that tossing the salad means something other than flipping Mesclun and Radicchio greens.  When did a simple culinary phrase become slang for something that would get a NC-17 rating?  For those who are clueless like me, a quick search on UrbanDictionary.com will make you reconsider saying tossing the salad again.

How did this topic come up or should I say rear its ugly head?  A co-worker approached me and asked me if she could talk to me.   She steered me into an office with another co-worker and leaned in close.  Thinking this was a serious matter, I was ready to extend a comforting hug or go into my It’s not that bad speech.  With a hushed voice reserved for libraries and theater performances, she asked me in a very serious tone if I knew what tossing the salad meant.  Taken back, I was disappointed that she wasn’t tapping into my reservoir of thirty plus years of accrued wisdom with a more life changing question.  So I answered rather haughtily that tossing the salad meant throwing up.  The confused look she gave me was the same I’ve seen on viagra buy online the faces of viewers while watching Sarah Palin give unrehearsed answers to reporters.  It doesn’t mean that, she replied.  Once again, I answered that tossing the salad did indeed mean puking.  She shook her head in disagreement.  No, it’s something sexual, she insisted.   Sexual?  Yes, she affirmed.  She thought for sure I would know what tossing the salad meant.

This is where I digress.  There are two ways I can take that statement.  The first is flattering that she would consider me hip, cool and current on all the new sayings.  The second is that she thinks I’m a sex freak bordering on satyriasis (the male form of nymphomania).  Sadly, I disappointed her on both fronts.

The other co-worker, who was listening to the conversation, did a quick Google search and read the definition out loud.  Not believing her, I read the definition myself.  Tossing the salad didn’t mean the expulsion of a foreign substance but did involve the licking of a certain orifice.

I felt so stupid.  Unconvinced that I wasn’t alone in my ignorance, I did a quick survey with other co-workers.  One by one, each co-worker made me feel that much more out of touch as they hashed out their interpretation of the phrase.  But when the Jehovah Witness knew what tossing the salad meant, I knew I was done for.

The common thread that tied everyone together was the fact that they all have known the meaning for quite some time.  When I asked them how they knew, they all shrugged their shoulders and said casually, It’s just common knowledge.

So I’m wondering where I misplaced the memo detailing all the current sexual innuendos, out-nuendos, under-nuendos, and any other -nuendos.  When tossing the salad no longer involves the use of tongs (or maybe it still does).  I’m scared that I’ll say hello to a co-worker and it will mean I like to see you naked.

And just as I am feeling like a pubescent boy learning about sex, an evil co-worker stops by and asks me if I have even given anyone a pearl necklace.  By the tone of his voice and the smirk on his face, I know a pearl necklace means something more than a cluster of shiny, iridescent spheres.

2 responses to Tossing the Salad and Pearl Necklaces