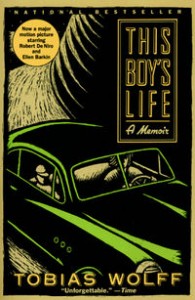 I tackled reading Tobias Wolff’s This Boy’s Life with a different gusto then I did with Andrew Pham’s Catfish and Mandela.  Paying attention to Wolff’s writing techniques and styles, I trusted my green highlighter to illuminate his writing prowess.  So after finish reading the book, I started to review the highlighted passages and realized I only had a couple.  How could this be?  I started to become frustrated that I had not paid more attention to what I was reading.  I was mentally kicking myself when it dawned on me: Wolff is such a brilliant writer that he got me to detour from my objectives and just pay attention to only his story.  So the question remains, how did he accomplish this?

In answering this question, I asked myself two questions: What is the thing and what is the other thing?  The thing is a coming of age memoir about a boy struggling to find himself.  The other thing is the taxing question of identity, alienation and escapism.  After these two revelations, other questions begin to surface.  How did Wolff manage to convey the thing and the other thing in his writing?  What writing techniques did he use?  How did he manage to detour me from my academic dissection to just enjoying the book?

Most notably, Wolff’s writing is simple but wittily composed.  In fact, there are no major dramatic plot twists or scenes in the book.  There are no far-fetched, grandiose similes or metaphors delving into the existential realms of identity, alienation and escapism.  Instead he uses a direct approach with uncomplicated, clever prose to recount his childhood.  He manages to make the memoir read like a novel.  Even though the time frame starts in the 1950’s, the narrative voice is young and contemporary.  This is important because it makes the reader feel like they are directly inside his character’s mind.  If the voice had been passive and reflective, in other words, older, then the tone of this book would have dramatically changed.  The times he changes to a more contemplative voice, the tone suddenly becomes more remorseful and regretful. (p. 27 and 121).

He establishes a youthful tone by referencing popular trends associated with adolescence.  As a child, Wolff’s character is preoccupied with guns and warfare.  Most young boys share the same fascination.  Wolff makes sure to emphasize that his first gun is his mother boyfriend’s, Roy, childhood gun, a Winchester .22 rifle, Roy had carried it when he was a boy and it was still as good as new.  (p.23)  Then the manner in which he builds a fortress and targets passersby that come within his sniper range all conjure images of a young boy playing soldier.  (p.24-26)  Even as Wolff transitions from pubescence to adolescence, he still reminds the reader that his character is still young by referencing The Mickey Mouse Club.  When Wolff and his friends watched the show, they lost their pretend grown-up demeanors and reverted back to being kids, We surrendered.  We joined the club.  Taylor forgot himself and sucked his thumb, and Silver and I let him get away with it. (p.44)  Then as a teenager, Wolff details his character’s youth by describing his inexperience, “when they discovered that I’d never been drunk and still had my cherry. ” (p. 184) By simply showcasing youthful anecdotes, the tone of the book stays young and contemporary.  I felt as though I was living out the same experiences alongside Wolff.  This made the reading light and palpable.

One technique that I noticed Wolff used to change his direct voice to a more passive voice is his use of quotation marks.  For example, he has a section where he and Roy discuss the possibility of a little brother.  Wolff uses quotations at the beginning and the end of the dialogue but noticeably absent in the middle. (p. 29)  He does this again in a conversation with his mother after their first visit with Dwight. (p. 67)  Although very subtle, it made me wonder why he would choose to employ this technique and what purpose it served.  By omitting the quotation marks, I believe Wolff wanted the reader to understand how removed he was from the conversation.  The reader feels how distant Wolff felt at that moment.  Wolff wanted to convey insincerity in his response, the same way we answer a question just to appease the person asking the question.  And in these paragraphs, Wolff does just that.  This technique is very clever and in my opinion, draws the reader deeper into the character’s thought process.  Just by removing the quotation marks in the middle of the conversation, Wolff is able to convey a mood without breaking the rhythm or pace.  The conversation continues but the reader can now visualize subtle inflections in the voice.

The most impressive aspect of Wolff’s writing is his consistent emphasis on his struggle to find his identity and his desperate need to escape, physically and mentally, the world around him.  As I mentioned earlier, Wolff doesn’t use any convoluted, complex metaphors to describe this struggle.  It’s straightforward and honest.  So honest, in fact, Wolff tells the reader on several occasions he is a liar and a thief. (p.62,133)  Wolff skillfully supplements these declarations with poignant examples throughout the book.  He layers these examples one after another so the reader has no doubt to the central struggle of the book.  Every story relates to the other thing.  He doesn’t digress.  His writing is focused and centered.

The main prevailing thought I am left with after reading Wolff’s book is that good writing doesn’t have to be complicated and convoluted.  Good writing is beautiful constructed sentences simply organized to give the reader a clear view of the message the writer is trying to convey.

2 responses to This Boy’s Life