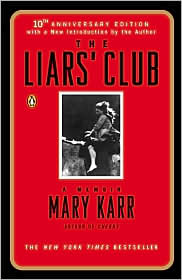 Mary Karr’s The Liars’ Club is easily the best memoir I have read thus far.  Initially, I thought her style read very similar to Tobias Wolfe’s This Boy’s Life and then come to find out ,Wolfe helped her edit the book.  Regardless, Karr carved out her own style and truly original voice in this book.  I approached this book different from the other books I have read.  Instead of highlighting and dog-earring excerpts that exhibited brilliant examples of writing (if I did that here, the book would have been painted bright yellow and filled with folded pages galore), I decided to read the book without interruption and let the impact of Karr’s writing dictate my critical response.  What impression did the story leave?  How did Karr’s writing make me thirst for more? Why couldn’t I put this book down once I started to read it?  I believe the key to the success of this book is Karr’s writing is less like writing than it is conversational.  I feel like she is telling the story rather then remembering it.  There is no judgment or moral implication nor does Karr strive for any.  It’s straightforward and un-complicated.  The language is tremendously simple yet ingenious.

Karr is also a published poet and her poetic style is evident in her writing.  Unlike Larry Woiwode’s What I Think I Did: A Season of Survival in Two Acts (whose book I thought was brilliant), her style of writing is more fluid and informal.  I especially love her use of parenthesis to inject her insight or clarification in the middle of a paragraph.  This technique made me feel as if she was whispering a secret.  It established a wonderful intimacy and made me trust her.  Using the parenthesis allowed her to warp time and add relevant information from the past, the present or the future.  She managed to weave different stories together without making the reader feel dizzy or lost.  She could be talking about her mother and then jump to her father’s reaction and then springboard to her sister’s response without losing continuity.   Her success was the fact that all the stories were related and helped support Karr’s main idea.  The main story was like a trunk of a tree and the side stories were like the branches.  It all connected together seamlessly.  Karr’s approach was systematic.  She would write about her memory of an event and then supplemented that memory with different family member’s reaction.

I think the times when I enjoyed the book the most were when she would write about her sister’s reactions to her follies and fumbles.  She could have easily just wrote about the events and described it in her own voice but instead she cleverly chose to allow her sister’s, Lecia, comments to describe the lightheartedness or seriousness of the subject.  There were several times where Karr would write – If Lecia was writing this or Lecia states – that I found myself relishing these tidbits of outsider knowledge because it peppered what Karr was writing.

Karr wr0te the book mainly through the perspective of a younger Karr.  She later fast-forwarded the perspective to an older self towards the end of the book when she dealt with her father’s death.  Karr’s younger self is a strong character in the book.  This book is definitely character driven, even though there were many events that take center stage.   She carries her child perspective even when she writes about being molested as an eight year old.  This was probably the most powerful story in the book.  I literally almost skipped this part because the way she describes the molestation put me in the reference of a small child.  It was almost more than I could bear.  Her honesty and objectivity of this story was truly astounding.  She didn’t break away from her character and didn’t add any social commentary.  She wrote about it in the same way she wrote about horseback riding or shooting a gun.  And that’s what made this story that much more powerful. Karr’s succinct and direct approach is truly inspirational.  There was no hint of remorse or condemnation one would expect in her story telling.  The reader is left with the magnitude of the situation without any forceful diatribe from Karr.  I was left speechless and in awe.

For the longest time, I looked at David Sedaris’ writings as a model for how I would like to write but after reading this book, I have found a new inspiration.  Her similes and analogies made me say wow and that was great out loud so many times I sounded like a broken record.  Reading Karr’s writing, I understand the powerful impact of well thought-out images or similes.  Consistency with an image is crucial.  I know that Karr’s experience as a poet helped her writing, but the fact that she knew when to reign in superfluous analogies, I believe is her strength.  She wrote in simple terms but cleverly constructed so that the reader wasn’t jumping from a simple image to an ornate one.  She wrote every detail with crisp everyday language.  And to spice things up, she would insert local colloquialism that added humor and originality to the story.