News Of A Kidnapping 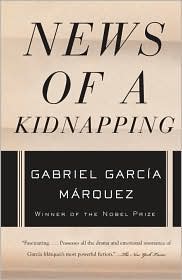 In a New York Times review in 1997 critic Michiko Kakutani wrote, News of a Kidnapping not only provides a fascinating anatomy of one episode in the biblical holocaust that has been consuming Colombia for more than 20 years,’ but also offers the reader new insights into the surreal history of Mr. Garcia Marquez’s native country. Indeed, the reader is reminded by this book that the magical realism employed by Mr. Garcia Marquez and other Latin American novelists is in part a narrative strategy for grappling with a social reality so hallucinatory, so irrational that it defies ordinary naturalistic description. How does this nonfiction account display Marquez’s skill at this narrative strategy?

OK, initially when I read this question and came upon the word magical realism, the first images that appeared in my mind were characters from The Chronicles of Narnia or Lord of the Rings.  In short, fantasy writing.  I can’t help but to associate the word magic with a mystical and fantastical universe.  Not the E.T. kind but like a yellow brick road kind.  Elves, sprites, wood nymphs and witches inhabit this land and good and evil battle ferociously to the end.  But then I thought, Marquez surely couldn’t be writing about fantastical viagra online for women characters when the subject of his book is mainly about the Colombian (I hate when people spell this with a u) drug world.  But in a way, he does.  GGM (Gabriel Garcia Marquez) does manage to inject bit of magic in the harrowing stories of the victims as well as the perpetrators.  I found that the parts of the book I like the most (and I actually did like this book) were the parts where my jaw dropped and my head shook in disbelief at the fantastical accounts captured by GGM.  Even Kakutani noted in her review the absurdity but nonetheless realistic portrayal of Escobar by his fellow countrymen – “kept a zoo with giraffes and hippos brought over from Africa, and where the entrance displayed, as if it were a national monument, the small plane used to export the first shipment of cocaine.”  You’re kidding me.

But I think in the case of this book, I don’t think it should be characterized as magical realism but magical journalism.  GGM has been quoted saying his most important problem has been to destroy the line of demarcation that separates what seems real from what seems fantastic.  This book does read like a journal article packed full of details.  No one can say GGM didn’t do his research.  Some may say he included every little bit of detail he could find in this book.  But I have to say; I did read this book in a couple of sittings.  Yes, at times, I had to refresh my memory as to all the characters but I was fascinated about the mindset and rationale that kept the victims alive and their spirits up.  And that was in large part due to their religious as well as their spiritual beliefs.

Magical realism takes fantastical elements and weaves them into a story with deadpan seriousness.  In the book, GGM describes how the victims and relatives of the victims have hallucinations and prophetic dreams.  How they are sometimes bathed in supernatural light.  How they pray to the Virgin Mary for protection.  And death-bringing butterflies.  As fantastical these beliefs may be, they are everyday occurrences for the characters in this book.  I don’t know if it’s because the culture lends itself to accept these unnatural occurrences as normal but GGM surely depicts them as so.  If these elements were lacking in the book, I doubt that I would like the book as much.  I also loved how GGM would contrast the gravity of the situation with a thought or an undercurrent so ridiculous it seemed that it was an invention of his imagination rather than a truthful account.  For instance, when Pacho Santos was kidnapped, the abductors were racing through the streets not only for security sake but also to try and catch the soccer game that was airing on T.V.  And the fact that Beatriz and Maruja were thrown parties on the day of their escape as if they were actual guest instead of captives.  Could you imagine this happening in the US?

And finally, how could we overlook the fact that it took a priest with supernatural abilities to convince Escobar to surrender.  He was a priest who was considered a saint and had the supernatural ability to talk with the waters and control their movement.  C’mon talk to the waters?  And finally, my favorite paragraph in the book, Don’t worry about me, my boy, he shouted to Villamizar, I control the waters.  A clap of thunder rumbled across the vast countryside, and the skies opened in a biblical downpour.

It doesn’t get any better than this.