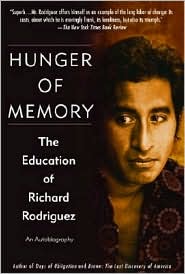 In his autobiography, Hunger of Memory, Richard Rodriguez breaks away from the expected conventional structure of an autobiography and instead weaves brilliant essays involving the subjects of education, assimilation, family and religion.  The title of his book, at first blush, suggests an intimate discourse in the retrieval of his memories but as the book unfolds, the main focus turns out to be more about cultural identity and alienation.

At first, I was a little stilted when I realized his autobiography was in the form of essays.  It was unexpected.  After reading Woiwode’s What I Think I Did, I was anticipating another narrative on the permeability of memories but Rodriguez chose to concentrate on the impact of cultural identity rather than what we remember or can’t remember.  Initially, I thought the essay structure was a brilliant. Since Rodriguez is a true intellectual with profound abstract thinking, the essays fit snugly into his complex style of writing.  The essays have an academic bent to them. Each chapter reads like a journal article from a scholarly magazine. The book, for the most part, lays out the foundation of Rodriguez’s societal, cultural and political beliefs.  He does write about childhood memories and experiences in his youth but each memory is self-serving to the chapter’s topic.  So in that regard, Rodriguez successfully conveys his points of view in an honest and objectified manner.  And it is in this objectification that presents a problem for me.  I feel the essay format is good to convey information and ideas but for a memoir, I thought the effect, over-all, was cold and lacked any intimacy.  While reading, I felt like I was a student in one of his lectures and he was using stories from his past to help further the theme of the lecture.  The stories were used as tools rather than centerpieces for the book.  It was too pragmatic.  The chapters felt distilled and disconnected.  Once I took out the brief and intermittent stories about his past, I was left with pages filled with intellectual ramblings.

After I digested his unconventional format, I was able to applaud his singular concentration to one topic and following it through.  At the end of every chapter, I knew where he stood on certain issues and how he arrived at his conclusions.  Everything he wrote served a purpose.  I paid attention to what stories Rodriguez used, how he wrote and the manner in which he wrote.  In writing this autobiography, I am actually describing the man I have become — the man in the present.  (p.190)

There is one section in the chapter, Achievement of Desire, I found peculiar.  Rodriguez switches from first person narrative to third person narrative.  While reading this chapter, I was often lost to whose voice I was reading about.  I didn’t know if the voice belonged to Rodriguez or Richard Hoggart, a modern educational theorist.  The switch takes place after the first excerpt of Hoggart’s description of the scholarship boy.  There were numerous times I couldn’t distinguish Rodriguez’s voice from Hoggart’s profile of the scholarship boy.  All of a sudden, both merged and became one voice.  I believe Rodriguez wanted to show the reader how much he identified with this profile.  He chose to do so by allowing Hoggart to speak for him.  The effect was startling but the reader gradually understands how Rodriguez intensely identified with the scholarship boy.  However, the abrupt manner in which he switches voice was awkward and confusing.

There were numerous times in this book where I felt Rodriguez was writing about my life.  Although a lot of his writing was in the abstract, he wrote about issues that affect most immigrants.  We deal with the issues of language and sounds, skin color, familial ties and alienation.  I know that I plan to write about these issues as well but I found Rodriguez’s take on them opened new viewpoints for me.

In his first chapter, Aria, Rodriguez starts off by the Anglicization of his name. I heard her sound out: Rich-heard Road-ree-guess. (p.9)  I read this part and couldn’t contain myself.  I don’t know how many times my name has been butchered.  But Rodriguez treats language as more than just incomprehension, he redefines our understanding of language as two parts: public and private.  Rodriguez manages to take language and break it down to empirical components such as sound and syntax.  From there, he expands on the emotional attachments to language and how it connects us to our families as well as our world.

The chapter on complexion was beautiful written.  His thoughts and the cultural biases towards dark skin are universal.  I felt that he was writing about my culture.  Rodriguez wrote about a time he overheard women talking about the misfortune of having dark skin and the gratitude that their children were light-skinned.  The way the women spoke, it seemed that dark-skinned children were afflicted with some kind of cancer.  He could have opted to personally describe his dark skin by inserting stories from his past, but instead he allowed the women, in particular, mothers, to describe the stigma of being dark-skinned.  This was much more powerful.  By using others to convey the bias towards dark skin, Rodriguez shows the reader the cultural perception of anyone suffering from dark skin.   The way he managed to weave the issue of dark skin into a narrative helped me to understand how I can achieve the same powerful effect in my own writing.

Overall, I thought Rodriguez autobiography was stunning and his writing is stylistic and impressive.  The times I enjoyed the book the most was when he would write about his childhood stories and relate them to the chapter’s topic.  When he would detour and got on his soapbox and start pontificating about his political views, I lost all interest.  He sounded egotistical and elitist.  With that said, I learned a great deal from his writing ability and the manner in which he engages the reader.

2 responses to Hunger of Memory