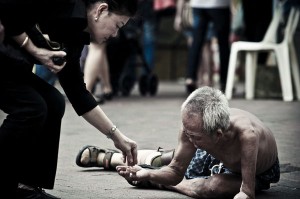 The other day, my friend Todd and I decided to go out for a bite to eat.  We’re pretty open-minded when it comes to food, although he stops short of eating the steamed tripe I usually order when we have Dim Sum.  He says it’s tasteless but I think he can’t get over the fact that tripe is the intestinal lining of a cow or pig.  Before you wince or ewww yourself to death, you should try it, if you haven’t already.  Too many people immediately pass over a dish because of its appearance or texture.  For me, I like the flavor as well as the rubbery consistency of tripe, sort of like chewing on steamed ginger-flavored jelly strips.  I have succeeded in getting him to taste it but have yet to get him to take a second bite.  I don’t even attempt to order chicken feet€

This time, we chose a Chinese restaurant down the street from my condo.  The place has been there awhile.  It’s not the best Chinese food I’ve ever had but it’s edible and close by.  The restaurant, located in an old run-down strip mall, is typical of many Chinese restaurants – a Chinese calendar hangs behind the cashier, lucky bamboo plants in glass cylindrical vases sprout up like persistent weeds around the restaurants, paintings of tigers, dragons or phoenixes on canvas material resembling straw placemats decorate the walls.  It’s a no fuss, no thrills restaurant with a mixture of booths and card tables hidden underneath red tablecloths.  We were seated at a table, our chairs, with padded cushions, were similar to ones found in convention halls.  We ordered our food: ginger garlic chicken for me, chicken and broccoli for him.  I opted for brown rice, my attempt to be health conscious.

About fifteen minutes after our dinner arrived, an older, heavy-set man suddenly collapsed to the floor.  I don’t know if he was sitting near the front or if he was on his way out, but he buckled over like a sack of potatoes.  The man was passed out, beached on the tile floor, not moving.  His dinner friend was leaning over him, trying to resuscitate him.  Luckily, there were some police officers in the restaurant and they called for Rescue.  Todd, with his back turned, missed the drama.

In a city filled with older retirees, it is not uncommon for people to collapse, whether it be at the grocery store, the mall or at a restaurant.  So it wasn’t the man’s blackout that shocked me, but the people’s reaction, or lack thereof, sitting around him.  When he fell, I immediately pushed my chair back and was about to rush over but before I could, the police officers were already there.  When they stayed with him, I pushed my chair back in.  What amazed me was that the people, literally inches away from him, watched him fall and did nothing.  I’m sorry, I stand corrected.  They did do something: continued eating.  The man was sprawled out on the floor with his friend huddling over him and they continued cutting up their General Tso’s Chicken, slurping up their Wonton Soup and dipping their eggrolls into orange duck sauce.  One guest glanced down on the fallen man looking annoyed almost as if he was expecting him to apologize for interrupting the guest’s conversation.  Nobody made an effort to help the man or his friend.  They all sat and ignored him like a child misbehaving in public.

To make matters worse, the restaurant employees, deciding they would not be upstaged, demonstrated a whole new level of indifference.  The front house staff including the receptionist, the cashier and the manager, circled the man and just stared.  No one asked his friend if he needed help or offered a cool wet cloth or even water.  I could see each staring down at him and then to one another.  It was as if they were thinking how they could move him so he wouldn’t block patrons entering and leaving the restaurant.

The wait staff was even more callous.  Each time a waiter came out with a tray of food, they looked disgusted when they realized they had to walk the long way around to deliver the food.  One waiter, deeming the food an emergency, stepped over the helpless man to a nearby table.  He didn’t skip a beat, after all, there was Chinese food to be had.

The man finally recovered and managed to sit in a chair salvaged by his friend.  Fire Rescue came and placed him on a gurney and wheeled him out.  The relief on people’s faces didn’t seem like they were concerned but more for the fact they could continue their dinner in peace.

I sat there and wondered if this is what we have become?  Have we, as society, been reduced to becoming cold, insensitive, turn-a-blind-eye kind of people?  We, myself included, see homeless people on the street and we stepped over them or cross the street to avoid them.  We roll up our windows in an effort to shield ourselves from panhandlers at a stoplight.  People witness accidents, robberies and beatings and don’t report anything.  We see someone fall to the ground and we continue to eat our Moo Shoo Pork.  Hell, we can’t even say thank you when someone opens the door for us.  I know when it comes to natural disasters, people are more then willing to offer help.  I’ve witnessed the generosity and outpour of help.  But why can’t we do the same for smaller scale catastrophes?  What if that was you who had fallen down or your mother or your father?  After all, in the big scheme of things, how much time and effort does it take to offer a hand, a seat or a smile? And if you are at a Chinese restaurant and someone falls, help them.  Trust me, Chinese food tastes even better a little cold.