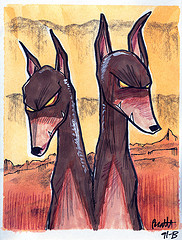 During the week, viagra tablets I pretty much stick to the same morning routine.  My alarm goes off at eight, I hit the snooze button and steal ten more minutes of sleep.  The alarm rings again and I hit the snooze again but this time I get up and turn on the shower.  I hop back into bed and doze off for a couple of minutes (all I need is a flat surface and I can sleep peacefully even if it is just a couple of minutes).  I wake up again for the third time and plunge into the shower.  It takes little time for me to get ready, thirty minutes tops.  The only variable in this routine is my dog, Chance.  He’s what I describe as a giant miniature pinscher or a mini Doberman.  Sometimes he sleeps through the whole ritual, other times he is worst than static cling and there are times he just observes me as if collecting data for research.

Once dressed, I usually head to the kitchen to make coffee and fix Chance’s morning meal.  While the coffee is brewing, I usually take the opportunity to walk him.  So goes my routine, day in and day out.  Except for the other day.

Everything went according to schedule.  The coffee was percolating while I grabbed the leash to walk Chance.  He does this bit every time I go to walk him where he jumps up and down as if tethered to a bungee cord.  I hooked the leash to his collar and we proceeded outside.

Chance is a pretty well-behaved dog.  I see other dog owners and can’t help but to compare my dog’s behavior to theirs.  Some dogs literally drag their owners around even when the owner has two hands on the leash.  While others have to be coaxed and cooed into walking.  I guess I’m lucky – Chance usually takes advantage of the full length of the leash but rarely ever presses any further.  Our walks consist of a loop around the condo complex and the nearby strip mall.

The strip mall bordering my complex comprises of an Italian restaurant, a veterinarian hospital, a theater and of course, the obligatory Vietnamese nail salon.  This one aptly named Saigon Nails.

During our walks, Chance, true to his breed, has to scent mark over all the other scents left by other dogs.  When he encounters one, he abruptly stops as viagra for women online if he stepped into a puddle of super glue.  He digs his nose down deep taking in full sniffs of an odor pungent to canines but oblivious to humans.  His nose does some sort of chemical analysis and he’ll take several seconds to decide whether to scent mark over the existing scent.  It’s a pretty involved process.  Sometimes I allow him to go through the whole routine, other times I rush him along.

When he’s not scent marking, he’s busy retrieving miscellaneous items back to me.  It’s usually mundane stuff like branches, plastic bags, paper cups, etc.  Sometimes, he brings back items that are a little more unconventional such as condoms or dead iguanas.  But those items are few and far in between.  So much so that I rarely think about what he brings back to me.  That is until the other day.

We were almost done with our walk, rounding the turn at the end of the strip mall that would begin our loop back home.  Chance, in his usual fashion, rummaged around underneath the bushes.  He had found a large clear, plastic package and was bringing it back to me.  It looked like the tuff plastic casing that houses knives and scissors.  In this case, the mold of the item was shaped more like a flashlight.

Drop it,” I ordered.

He stared at me, cropped tail wagging like an overworked windshield wiper.

I moved towards him to take the package out of his mouth.  Thinking it was a game, he started to dart around.  The more I reached for him, the more nimble he became.  Out of the corner of my eyes, I see one of my neighbors approaching with his two dogs.  His dogs, seeing what looks like play , quicken their pace towards me.

I managed to grab the edge of the plastic casing and a short tug of war ensued. Chance kept wriggling the case back and forth so that I couldn’t make out the cardboard description still sandwiched inside.  Finally, I was able to extricate the package out of his mouth.  What looked like a flashlight casing turned out to be something completely different.  It was my fault for not inspecting the casing more closely.  What I had mistaken for the outline of a flashlight turned out to be an outline of a ten-inch dildo.  Somebody had thrown in the bushes the package for a Realistic, Life-Size, Genuine Cast of Gage Weston 10 Dick. With the added bonus of a sturdy suction cup.  Imagine the look on my face as I realized what had been in my dog’s mouth.  This gives new meaning to chew toy.

Where the hell did this come from?  I immediately knew my answer : across the street is a store called the Fetish Factory.  Known for its provocative inventory, this apparatus, the length of a small child’s arm, no doubt had shared the same shelf space with others of its own kind or as the old adage goes, of the same mold.

I felt like the guy who got caught in the bathroom that was stunk up by a previous occupant when another guy walks in and gives me that look as if I was the culprit.  You want to defend yourself but doing so only makes you look guiltier.  My choices were limited.  If I threw the package away, the neighbor would see me and no doubt investigate what I threw away.  I could try to hide the package, but it was too large to stuff in my pocket or underneath my shirt.  So I decided to do the only thing I knew how to do – play it cool.

My neighbor approached me with his two dogs leading the way.  I greeted him casually, luckily his hands were occupied with the dog leashes so I didn’t have to proffer a handshake.  I tried to nonchalantly hide the package behind me but as luck was not on my side, Chance, seizing the occasion to further humiliate me, jumped up and grabbed the package out of my hand.  The other dogs, of course, thinking it was a game, began to lunge for the package as well.  And as this comedy of errors progressed, Chance ran over to my neighbor with the package in his mouth.

My neighbor, being neighborly, reached down to grab the item from Chance’s mouth.  I could only smile as the last bit of my dignity sunk into the gaping hole I felt I was pitched into.  Chance offered little resistance as my neighbor took the item away.  I saw the look of shock when he realized what the package was.  He tried to disguise the shock with a nervous smile as he handed the package back to me.  I noticed how he casually wiped his hand on the back of his jeans.

You too,” I replied too cheerfully.

He turns and walks in the opposite direction.  Although I can’t see it, I know he has turned several times to look back at me.  I can feel his stare burrow in the back of my head.  I can only imagine what he is thinking, 10 inches huh?

One response to Caught Red-Handed